What Your Donation Supports

The Boy Scouts of America is one of the nation’s largest and most prominent values-based youth development organizations, and provides a program for young people that builds character, trains them in the responsibilities of participating citizenship, and develops personal fitness. As a nonprofit organization, the Boy Scouts of America relies on the generosity of charitable donations to support its ongoing operations and future capital expenses at the local and national level. Each gift, regardless of size, provides invaluable funding for BSA programs that benefit our Scouts in Mayflower Council.

Investment in Character is the annual giving campaign of the Mayflower Council. Funds from this campaign are used to fund the council’s ongoing operations, making this fundraising effort of vital importance to the delivery of quality programs, facilities, and unit service.

There are three components to the Investment in Character campaign: Family, Community and Leadership.

Those who generously donate to our Investment in Character campaign with a gift of $311.65 (cost of delivering the Scouting program to 1 youth for an entire year) will receive a special edition “2020 Investment in Character” Council Shoulder Patch. In addition to one of these Council Shoulder Patches, donors who make a gift of $1,000.00 or more will also receive a Mayflower Council money clip or change purse.

Help keep Scouting strong by Investing In Character.  Thank you for your generous support.

Endowments gifts are invested in the Council’s permanent endowment trust fund. The fund is managed by an outside investment firm that is overseen by the Council’s Endowment Committee. Annual financial withdrawals from the Endowment Fund are based on five percent of a five year rolling average that enables the Council to continually grow the Endowment without touching the principle.  Each year, a portion of these funds are placed in the Council’s operating budget with the remainder earmarked towards capital improvements at our camping facilities.

Those who who contribute $1,000 or more in cash or securities to the Council’s permanent endowment fund are eligible to receive the James E. West Fellowship. This award, named for Scouting’s first Chief Scout Executive, is often used as a way of recognizing an Eagle Scout or a volunteer Scouter in your unit or district. An organization or individual may also contribute in their own name demonstrating their support of and commitment to Scouting’s ideals.

Please fill out the form below and submit to awards@mayflowerbsa.org. 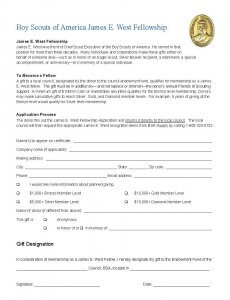 Honor a friend or relative with a lasting gift to the Mayflower Council.   Donations to the Memorial and Tribute Fund are a gratifying way for individuals, businesses, or groups to honor, recognize or remember special friends and relatives. Tributes are suitable for memorials or special occasions such as birthdays, birth of a child or grandchild, anniversaries, retirement, attaining the Rank of Eagle etc.  Memorial & Tribute Fund donations can be made in any amount and all donations are kept confidential.  Special acknowledgements are sent to the donor and the recipient or their family.

The Second Century Society, SCS, is the Boy Scouts of America’s national social organization of individuals, families, foundations, and corporations stewarded by key volunteers and implemented by the Boy Scouts of America National Foundation. Established in 2011, SCS, replaces the 1910 Society and Founders Circle as the way to recognize Scouting’s major donors at both the local and national levels. Qualifying gifts to be recognized as a Second Century Society member have a broader definition than Scouting’s major gift recognition in the past. These gifts include an outright gift of $25,000 or more payable over five years, or a deferred gift of $100,000 or more to a local council, the Boy Scouts of America Foundation, high-adventure base or any Scouting entity for operating, capital, or endowment.

SECOND CENTURY SOCIETY APPLICATION
Toggle Sliding Bar Area
Sign up for Our Newsletter
Sign up for our weekly newsletter for the latest news, updates and event information.