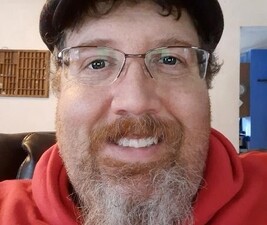 Charlie Murphy is from Carver, Massachusetts. Charlie was a Cub Scout and Webelos for Pack 35 Annawon Council for 4 years. The oldest son of Charles Sr. and Linda, Charlie has three siblings: John, Michael and Marilyn. As a teen, Charlie assisted his mother as a Sunday school teacher for the First Baptist Church in Plymouth.

Charlie graduated with a vocational degree in offset printing communications in 1987 from Old Colony Vocational School. He has been employed as a production manager for 26 years at We Print Today in Kingston. He is a counselor for the Graphic Arts Merit Badge.

Charlie married Monique Cote in 1991, and the two have 4 children together. He is the father of Leah, Nicholas, Brendan, and Payton. Monique passed away in 2008, losing a battle with breast cancer. This left him a widow at the age of 39 with children ages 6, 8, 13, and 15. Charlie married his wife Michelle in 2010, and they happily live in South Plymouth.

Raising 4 children in a Christian home, Charlie was an assistant children’s pastor for the Vineyard Church in Kingston. He coached flag football. He assisted in his daughter Leah’s Girl Scout troop and assisted in Leah’s 4 H equestrian group” Equus Friends”. Charlie coached Plymouth South baseball for 7 years. In 2002 Nicholas became a Tiger Cub and asked his father on the way home from his den meeting, “Why don’t you have a tan shirt dad?” Charlie turned around and became an adult leader that day.

Charlie enjoys traveling and spending time with his wife Michelle. He loves cooking, campfires, fishing, making pickles with Leah, concerts, and shooting sports. He supports his community charities by fundraising and creating awareness for the Jordan’s Polar Plunge yearly and assisting the Black Feather Horse Rescue in Plymouth when he can.

Serving the Boy Scouts of America since 2002, Charlie currently works with the advancement team for Cranberry Harbors District. Charlie serves as a merit badge counselor and Eagle advisor. He has earned the District Award of Merit; Cub Scouter, Scoutmaster, and Cubmaster Training Awards; Unit Leader Merit Award; and Adult Religious Service Award. Charlie is an Order of the Arrow Brotherhood member and a Vigil Honor nominee.

Charlie has been Eagle advisor to most of the 25 Eagle Scouts of Troop 151. Charlie was honored to mentor Miss Molly J. of Troop 1920 Plymouth on her path to Eagle. She earned her Eagle Scout award as part of the inaugural class of female Scouts in Mayflower Council.

Serving since 2013, Charlie is the Associate Pastor of the Vineyard Crossroads Church in Wareham. His duty to God comes first in his life. His favorite verse is Micah 6:8 which reads:

He has shown you, O mortal, what is good.
And what does the Lord require of you?
To act justly and to love mercy
and to walk humbly[a] with your God.