Did You Know? “Scouting for Boys”

Did You Know? “Scouting for Boys”

Scouts in the United States celebrate the 1910 incorporation of the BSA on February 8.

However, the genesis of the World Scouting Movement finds historians noting several essentialdates. One of the most important is *January 24, 2008. 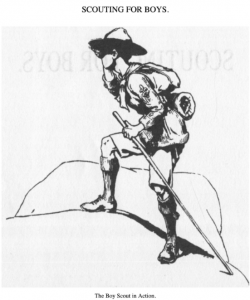 The name Baden-Powell was already well known to many English boys, and thousands of them eagerly bought up the handbook. By the end of April, the serialization of Scouting for Boys was completed, and scores of impromptu Boy Scout troops had sprung up across Britain.

But remember, this simple series of booklets, priced so boys could afford to buy and read them, created the World Scouting Movement. And, in BP’s words, we can see clear connections to our own Scouts BSA.

To become a Boy Scout you join a patrol belonging to your Cadet Corps, or Boys’ Brigade or club.

If you are not a member of one of these, or if it does not as yet possess a patrol of scouts, you can raise a patrol yourself by getting five other boys to join. They should, if possible, be all about the same age. One boy is then chosen as Patrol Leader to command the patrol, and he selects another boy to be the Corporal or second in command. Several patrols together can form a “Troop” under an officer called a “Scoutmaster.”

You all take the scout’s oath, that is you promise, on your honour, three things, namely:

One wonders what BP would think about the Internet. After all, you can read all six collected booklets via Project Gutenberg. From those initial serialized Scout manuals, Scouting spread across the UK and, well, everywhere.

With the success of Scouting for Boys, Baden-Powell set up a central Boy Scouts office, which registered new Scouts and designed a uniform. By the end of 1908, there were 60,000 Boy Scouts, and troops began springing up in British Commonwealth countries across the globe.

The rest, of course, is history.

*Ed. Note: I have also seen the date January 15. But, we’ll stick with History.com’s assessment.