Has your Unit visited the Nobscot Scout Reservation?  Pack 100 Westborough had a successful visit recently.  Enjoy their pictures and story of:

The trip that was unanimously voted “The Best Overnight the Pack has Ever Had” by its participants.

First you should know that the weather was rough, it poured cats and dogs the day before and all morning. Even with the rain the Scouts did their appointed rounds with “Scouting for Food” on the morning of the 3rd. Then the pack totaling over 80 Scouts and parents headed up to Nobscot where the camp was already set up by Cubmaster Mr. William Bramley.

As car after car pulled in, Mr. Bramley was outside directing families on where to park and helping them to the site.  We had 24 people in the Henderson Cabin and another 20+ tents set up right outside.

Cubmaster Bramley led the scouts on a 2 mile hike to the top of the camp before dusk and then again after breakfast.  Lion Den Leader Renee Schoch led the Lions on their own nature walk, they had a blast.

While dinner was being prepared the scouts enjoyed a long game of kickball in the field and played until there was no more light. These scouts could teach the majors a few things about sportsmanship being that the final score was 20-19.

Cubmaster Bramley is not only just a great leader but a CHEF in all senses of the word.  For dinner, he made Mac n Cheese and Hot Dogs for the younger Scouts (However the big Scouts and adults took part too, as it was awesome)  He had also prepared handmade kabob skewers for the big event. We have vegetable kabobs, chicken kabobs, and sausage kabobs! There were also several vegan and vegetarian options too.

Just when you thought it could not get better, desert time came.  Cubmaster Bramley with the help of the Scouts made many chocolate frosted cakes right there in the cabin.  He also made an upside down pineapple cake for the adults that would rival the best bakeries in the North End.  But I would be remiss if I did not mention the S’mores that were enjoyed by all.

But the food still did not stop there!

At 5:00 am, Cubmaster Bramley was up in the kitchen preparing breakfast. With the help of the oven and 2 portable stoves he brought. Mr. Bramley made the best Cub Scout breakfast that included a ton of pancakes, sausages, coffee, milk and juice.  It was fantastic that the Scouts woke up to the smell of fresh hot pancakes wafting in the air. What better way to start your day than with fellow Scouts, parents and a world class camp chef. Our Cubmaster Mr. Bramley is an inspiration to our pack and could teach a few things about fine dining in the woods.

By 11:00 am the clean up was finished, everyone helped right down to the lions who had a contest to see who could get the most trash picked up.  We certainly left Nobscot in a better shape than we found it.

-Written by Mark Derderian, Pack 100 Treasurer and father of a Webelo! 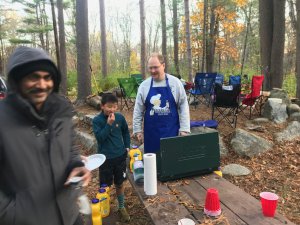 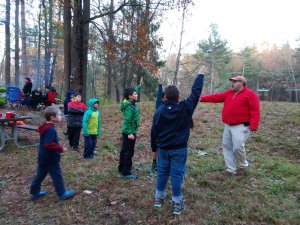 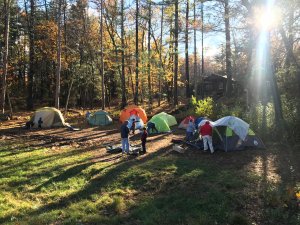 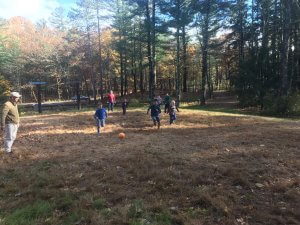