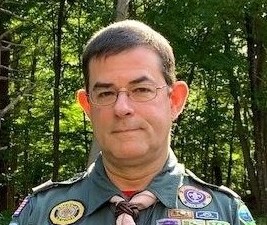 Mike was born in Brooklyn, NY and grew up on Long Island. His Scouting experience began in Cub Scouts in Pack 270 Syosset and Pack 585 Plainview, ultimately earning the Arrow of Light (1977). He crossed over to Troop 13 Plainview earning the Ner Tamid religious award and the Eagle Scout rank (1982). Mike was elected to the Order of the Arrow, completing his Ordeal (1980) and sealing his bonds in the Brotherhood (1983). He attended Onteora Scout Reservation for summer camp (1978-1980, 1982) and later worked in the camp office (1983).

After high school, Mike attended Wright State University (1988) and the State University of New York at Stony Brook, School of Medicine (1992). He was a general surgery resident for two years at the Mary Imogene Bassett Hospital and then completed a diagnostic radiology residency program at Nassau County Medical Center (1998), including serving as chief resident his final year. Following that, he completed a fellowship in vascular and interventional radiology at the University of Iowa Hospitals and Clinics (1999).

Mike’s professional career as an interventional radiologist began in Indiana where he was an attending physician and assistant professor at Indiana University (1999-2005). The family then moved to Massachusetts where he is currently in his sixteenth year as attending physician at Brigham and Women’s Hospital, consulting staff at Dana-Farber Cancer Institute, and assistant professor at Harvard Medical School. He was inducted as a Fellow of the Society of Interventional Radiology (2008) and American College of Radiology (2020).

Mike met Jennifer at Wright State, and they were married in June 1992. They currently reside in Easton and have two children; Maxwell is a Life Scout in Troop 47 Randolph, and he and Morrissa are Venturers in Crew 29 East Bridgewater. Mike became re-involved in Scouting when Max joined Pack 76 Easton; he has served as a committee member for all of the units in which Max and Mo have participated. Mike began helping on the Squanto District Committee after Max crossed over to Scouts BSA, served as the Squanto/Sachem District Chair (2012-2019), and continues to sit on the Mayflower Council Executive Board. After stepping down as district chair, Mike embarked on unit service, becoming a unit commissioner, and he has earned his Bachelors of Commissioner Science. He is also a merit badge counselor and has assisted at merit badge university for over 5 years.

Mike has received various Scouting awards including the training awards for Cub Scout, Scouts BSA, and district programs, District Committee Key, Shofar Award (2014), James E. West Fellowship Award (2015), and the District Award of Merit (2016). He is a life member of the National Eagle Scout Association (NESA) and recipient of the NESA Outstanding Eagle Scout Award (2017). Mike became a Vigil Honor member of the Order of the Arrow (2017); completed the centennial Wood Badge training program (N1-251-18); is a Legacy Society Fellow of NESA, Order of the Arrow, and Scouting Alumni & Friends; and is a member of both the Camp Squanto and Onteora Alumni Associations.